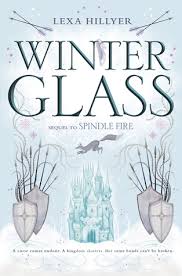 352 pages
Expected publication: April 10th 2018 by HarperTeen
***Thank you to Edelwiess for providing me with an e-galley of this sequel to Spindle Fire.
This is a direct sequel which starts off when the curse under Aurora has been broken and she awakens to find war between the fairy queen Malfeur and Deluce brewing. We are taken through different POV’s throughout the entire book giving depth to the goings on of the story. This is one of my favorite series because it gives you a glimpse of what the villains are doing and thinking from their POV.
Things are a little dark in this sequel as the characters we fell for in Spindle Fire are caught up in war, mystery and politics as well as forbidden love. Their lives change as they head down new paths, sometimes together and sometimes separately. There’s sacrifice. Lots of it. These princesses really step it up a notch. This isn’t your typical fairy tale story.
I didn’t like a few things, but they paled in comparison to what I did like. The writing is splendid and almost envying. I felt as though I was there with everybody and I lost track of time finishing because my eyes just couldn’t see the real world around me. That’s what a book should do.
That all being said (most I don’t want to spill since some people like to be surprised when reading a book) I really enjoyed this book and I will buy it to add to my shelf when it releases.